Leading in by Doing Good: How Businesses Can Build Trust with Sustainability 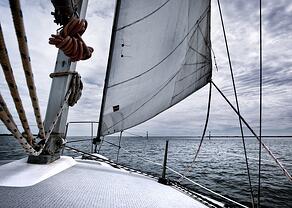 corporate responsibility and social consciousness from brands to strike the triple bottom line balance: 69% of respondents in a research by Havas say they expect enterprises to make the world a better place. For the first time ever though, these expectations are becoming a “license to lead” with businesses now being more trusted than governments to make a real positive change towards a sustainable future. Such is the major finding of this year’s Edelman Trust Barometer.

In its 14th annual survey in 27 countries among 33,000 respondents, Edelman found that there is a global gap of 14% between trust in business and trust in government. This number has never been so high before. Business has been consistently trusted more than government over the past years: People now expect businesses to lead on social change, not governments.

Nevertheless, half of respondents believe that the most important role of government in business is to protect consumers from irresponsible businesses as well as regulate those. On the other hand, over 70% of people agree that policymakers should be consulting with multiple stakeholders when developing regulations on business and industries. Businesses should therefore “foster an informed conversation that provides the context necessary to create regulation that is relevant and as effective in its ability to protect as it is in its ability to move society and business forward.”

As it turns out, in 2014 business will be required to lead the debate for change. That's quite the shift considering last year's crisis of leadership. Looking at the retrospective (see image below) it's clear how the lacking trust in business and government by the public has led to an increased requirement for business to take action. Being a force for good by striking the balance between environmental, social and economic aspects is an important step towards regaining that trust for the long term. 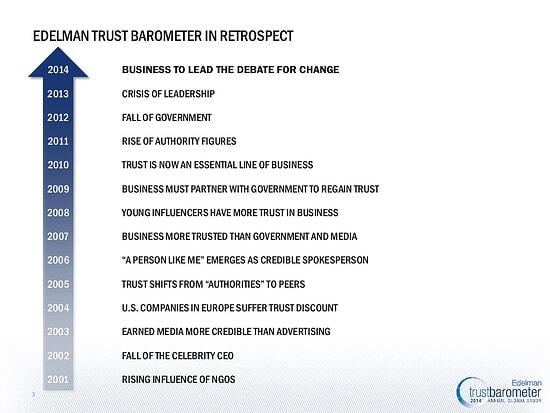 I am very glad to see so much optimism in the role of business and corporate communications for sustainability. As Edelman puts it, operations and CSR programmes are now tablestakes compared to 2008. This means that for businesses to have a credible and competitive market position sustainability is becoming the norm with 84% of respondents stating that companies can take specific actions that both increase profits and improve the economic and social conditions of the community they operate in. This is an incredible opportunity for brands to create a new marketplace and "lead in" by doing good, being driven by values and a bigger purpose than profits.

As evident in the video, leadership and CEOs are still at the bottom of the most trusted and credible company spokespeople, with academic or expert, technical expert and a person like yourself leading. Even when it comes to communicating company messages employees are the most trusted influencer leading far ahead from CEOs or media spokespeople.

This just proves the findings of the 2013 Ketchum's Leadership Monitor, where 29% of people pointed a gap between expectation and delivery on communicating in an open and transparent way and only 16% believed leaders are effective communicators.

So how can brands build trust? How can leaders really lead?

According to Edelman, the most significant trust-building opportunity for businesses lies in engagement and integrity. 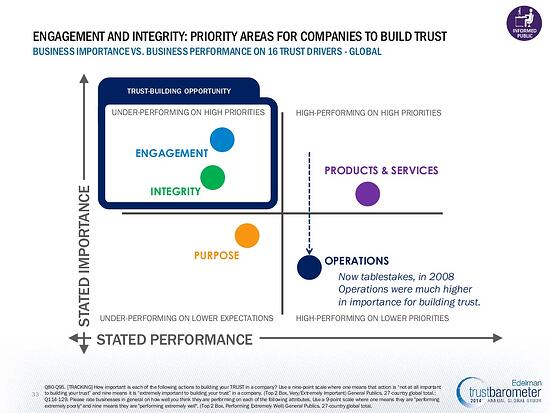 Online search has become the most trusted source of information for pretty much any reason or occasion - for business information, for breaking news about business and to confirm or validate information or breaking news about business. I find it rather fascinating how traditional media such as newspapers and TV are significantly less trusted on these matters. These findings once again illustrate the shift towards new media formats initiated by the rapid global embracement of new social technologies.

One important area is engagement through an active media presence. That, of course, includes social media too.

It's clear that for leaders to lead the debate for change they are required to embrace new media. Edelman even says that CEOs should now become Chief Engagement Officers. 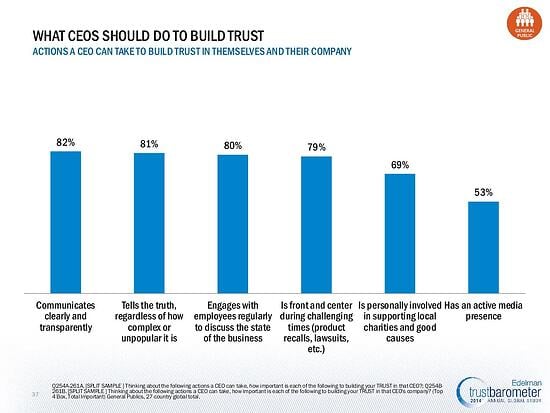 With the significant lack of trust in government, people are now turning to businesses and expecting them to innovate and lead the way.

This consumer pressure will hopefully move leaders to act and change the communications debate to lead in by doing good.

Businesses should and can become change agents for good.