Yesterday I came across

Stephen Waddington’s blog post introducing the findings of the 2013 Ketchum Leadership Communication Monitor (KLCM) and I found them quite interesting and worthwhile discussing, so I decided to share them. (Oh and by the way, Brandzeichen (the agency I work at) is now officially part of the Ketchum network).

Some background first: the annual research explored the perceptions of 6,000 people in 12 countries on five continents “regarding effective leadership, effective communication and the intrinsic link between the two.”

Here’s what got my attention:

These figures also reflect the findings of the 2013 Edelman Trust Barometer and so invigorate even more the global crisis of confidence and trust in leadership.

But how could people trust leaders when they stubbornly refuse to adopt new media? We, the younger generation, expect leaders to be active online on the platforms that we actually use. I am honestly telling you that I do NOT watch TV, NOR do I listen to the radio and I SUPER RARELY read print newspapers or magazines. And I am not the only one – just as I highlighted in my previous blog post. I support Stephen Waddington’s opinion that things could be very different if leaders embraced new media. That’s why the formula for effective leadership developed by Ketchum in accordance with the study findings includes Personal Presence which is based on platforms such as Twitter and Facebook:

The below infographic that Ketchum produced shows some further interesting findings: 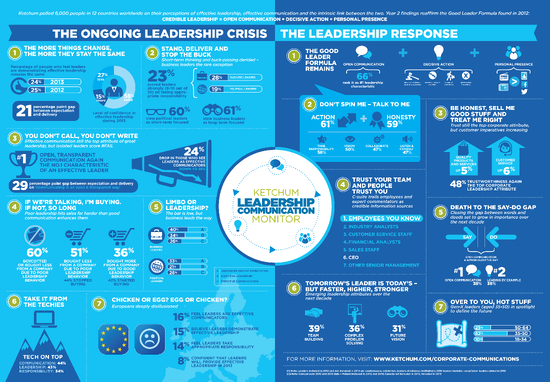 So leaders what are you going to do?