Why Trust and Transparency are Key Values of the Future

Less than one in five of the 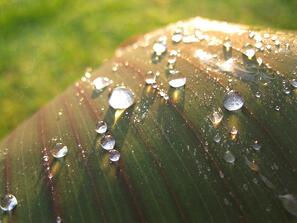 general public believes that business leaders and government officials will make ethical and moral decisions. This was one of the main findings of this year’s Edelman Trust Barometer – the 13th annual trust and credibility survey by one of the leading public relations consultancies in the world Edelman.

With 31,000 respondents in 26 countries, the study found that in general there are significantly lower levels of trust in business and governments and the traditional authority figures such as CEOs or prime ministers, but also in the media. According to Richard Edelman, CEO of Edelman, what we are seeing today is “a crisis of leadership”.

50% of respondents said they trusted businesses to do what’s right, however only 18% believed that business leaders will tell them the truth in a difficult situation, suggesting that trust in leaders’ ethics and morality are very low. This massive gap between trust in business and trust in business leaders is an indication that the general public is much less confident in chief executives, but rather in company employees.

On the other hand, academics, technical experts and a person like yourself are nearly twice as trusted as a chief executives or government officials.

This lack of confidence in traditional authority confirms the trends in the democratisation of influence over the past few years, which in my opinion was strongly impacted by social media. We have now moved on from top-down, authority-driven monologue to dynamic, multi-audience dialogue, where the power and influence is in the hands of the many, not the few. (An example here is Adobe’s practice of asking heavy users for product feedback via social media before market release.)

This year, 45% of respondents said they trusted media less. In the UK the release of The Leveson Inquiry (an investigation into the practices and ethics of the British media after the News International phone hacking scandal) has had a massive impact on the perception of the UK media with a dramatic 14-point drop, making it the least trusted institution.

Nevertheless, there’s been an overall steady growth in trust in media over the past years with 58% of the general population now identifying mainstream media and online search as the most trusted sources of information. In emerging markets such as Brazil or India 50% trust all forms of media, while in developed countries trust strongly varies according to media type. For example, 58% of respondents from emerging countries trust social media, however in developed markets this number is twice as low – 26%.

Another interesting finding was that banking is the only industry that has not yet seen any global recovery in trust since the 2008 financial crisis. According to the research this is due to poor performance and the perception of unethical behaviour.

Respondents identified corruption or fraud and wrong incentives driving business decisions the most important reasons why they trust businesses less. Such scepticism results in the fact that the majority of people now need to hear company information three to five times to believe its messages.

As Richard Edelman says, “there’s a very important change in values that’s happened in the last five years. What matters today is treating employees well, putting customer ahead of profit, and being transparent about what you’re doing in your process.” Financial performance and being recognised as a “best” place to work are not considered as valuable as they were back in 2008.

These findings point to something else as well – the mentioned integrity-based values are inherent to sustainability, which means we might be seeing a trend towards the need for sustainable business practices and models because society is increasingly expecting corporate consciousness. 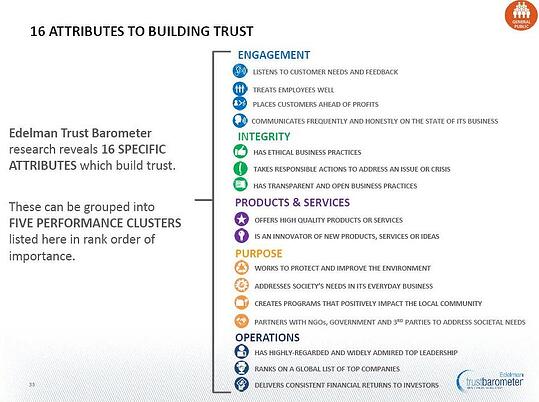 What’s the role of PR here?

PR professionals are the ones responsible for the reputation of organisations, which in the end depends enormously on trust. It is PR practitioners who have to manage trust for their clients. Organisations and their leaders therefore need to let comms professionals advise and consult them how to build and keep trust. And indeed here is where the great value of PR lies.