Do you remember what 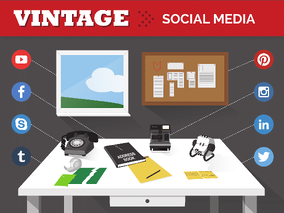 life was before social media? I'm a Millennial, so I find it a little bit difficult, but I suppose for the older generations painting a picture between then and now must be quite shocking, especially for those working in the media – either in PR and communications or in journalism. Describing what's changed, how and why is the easy part. Adopting these changes and adapting to the new way of business for an effective modus operandi at work is the difficult bit if you are not a digital native.

So, let's dive into some cool infographics and interesting research findings from a few new studies in the areas of social media, journalism and PR.

First stop: our daily activities before and after the emergence of social media.

At the bottom of this post you can find an infographic from Zerofox that takes us a walk down memory lane, showing us what non-digital assets we used to rely on and their new social versions. Some of these include:

Funnily enough, I still have a cork board at home, but I use to pin little brochures or tickets from places I've been – for example the ticket from the amazing Sade concert I went to a few years back or the card I got from ShaunTerventionUK. So basically memories and things I've received offline, in real life, things you can touch.

There are some interesting facts in the infographic too. For example, did you know that the inventor of the original post-it once said: "I thought, what we have here isn't just a bookmark. It's a whole new way to communicate." How nicely does that fit to all new social networks, don't you think? Another impressive figure – it would take about 500 million post-its to circle the globe, however 500 million is the number of tweets sent every day!

Social media has not just fundamentally changed our daily activities, it has also reshaped news. Did you know that half of journalists rely on social media as their main source of information? That's what the 2014 Study impact of Social Media on News published by Netherlands-based bank ING shows. The downside though is that social media is still not deemed reliable according to one third of journalists (even though half of them still relies on it as their main source of information?!?).

Overall, journalists are now using social media more and more to engage in a dialogue, even with PR practitioners – 57% of journalists consider social media to be ideal for contacting PR professionals.

What's astonishing is that 68% of journalists believe that journalism can no longer operate without social media. That's pretty indicative of the influence of social on news and the way news is created and disseminated.

Here are some more interesting findings (to offer you an overview, I've integrated the infographic with the main study figures at the bottom of the post too):

One thing that worries me is the shared opinion that journalism will be driven by clicks and views more than by content. Why? The way I see it, nothing beats good content. Ask Google and their multiple algorithm changes to Panda and Penguin. It's quality that always wins, isn't it?

When we talk about news, we can't ignore the relationship between journalism and PR. After all, media relations is still a big part of a PR pros' toolkit. What's funny is that, according to the study, PR professionals believe that news is becoming less reliable as journalists do less fact-checking: Only 20% always check the facts before publishing. ‘Publish first as quickly as possible, correct later if necessary’ seems to be the motto these days. Why do I think that's funny? Well, if you google "journalism and PR" you'll see so many articles "bashing" PR pros for their unprofessionalism, but is it professional not to verify the reliability and trustworthiness of the information before publishing it? I'll leave the answer to you.

As I've written many times, not only has social media impacted the media landscape, it has also revolutionised the PR industry. Social media's influence has been so prevalent that 81% of the PR professionals surveyed in ING's news study believe that PR can no longer operate without social. 85% use social media on a daily basis and 55% are unable to perform their duties without it. Oh, I so agree with that.

Another recent research this time by Vocus shows similar results. The study discovered a changing world in which PR professionals are moving towards digital and social media.

Vocus took a broader perspective to examine how PR pros grapple with digital technologies. As it turns out, PR professionals have not yet adopted all new digital tools. While Twitter, Facebook, LinkedIn etc. are now the norm, something new is always around the corner, becoming the next challenge:

No wonder then that only 57% know how to handle the constant information flow with many still struggling to find new routines, as discovered by the latest European Communication Monitor.

What all these study findings show is that both journalists and PR pros recognise the need to adopt new tools and are making efforts to integrate them into their daily activities. Of course, as technology never 'sleeps', the two most important attributes professionals should become pretty comfortable with are flexibility and the desire to constantly learn. Because things change and will continue to change at an even faster rate. You can't lack behind. Not any more.

How are you coming to grips with social media?