Republished with permission from Leighton Interactive.

I'm a millennial in marketing and a former TV journalist who geeks out over the concept of Inbound Public Relations (PR). Never heard of it? I'm about to blow your mind with simplicity. Here I go:

In other words, don't wait for someone else to realize how great you are. Get the word out, and fast. The PESO model is still alive and well, but too many companies are ignoring one major part of the timeless marketing model - Earned Media. I'm a fan of cliche quotes. Here's one of my recent favorites. Literally, I want to shout this from the top of the tallest building in Downtown St. Cloud for all to hear. 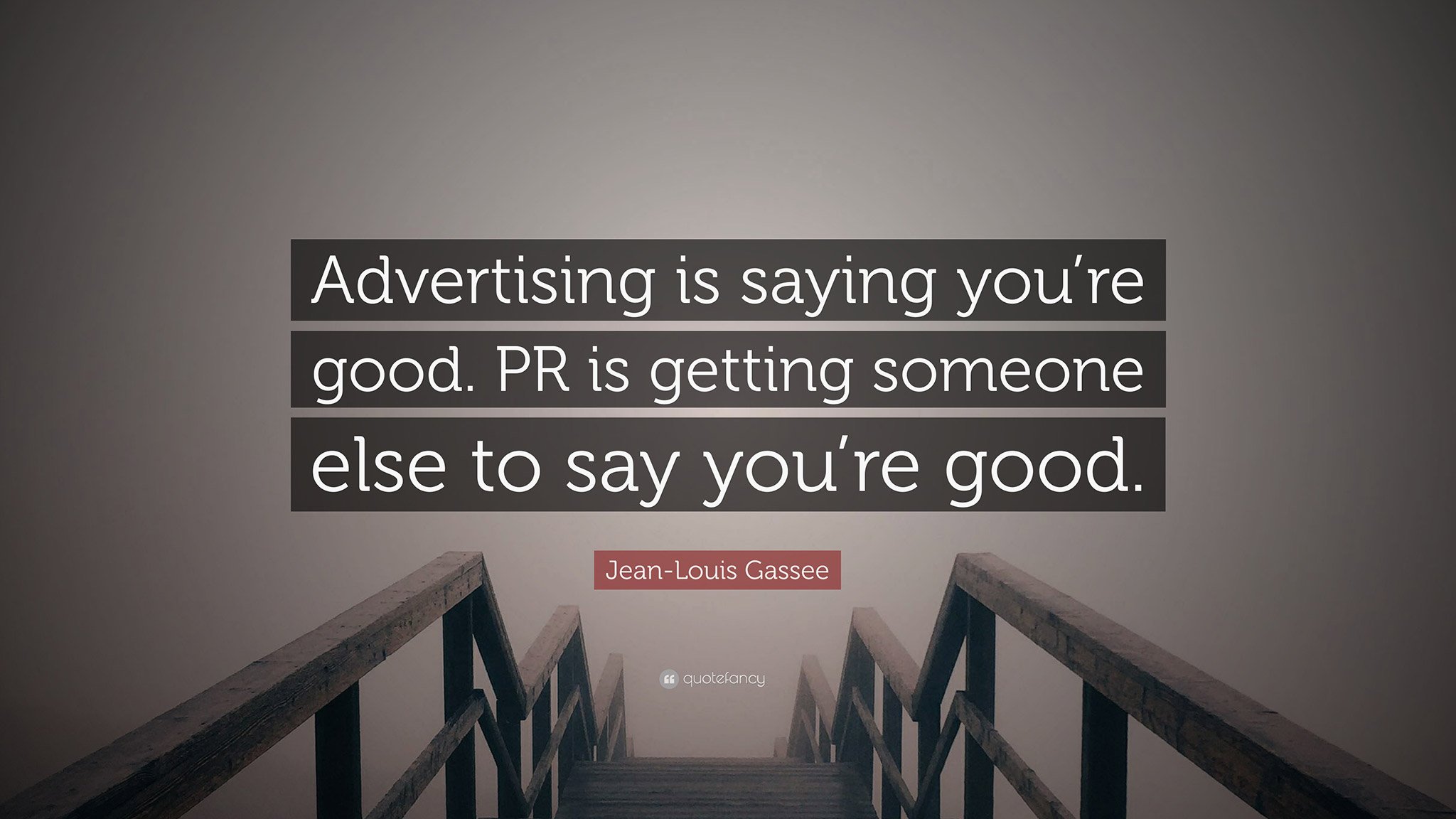 I see amazing marketing strategies in action as they create robust owned content, social media strategies, paid efforts, video, photo, and more. What many companies lack is third-party validation, which is essential when marketing to today's generation. In a digital world saturated with content, traditional media like editorial articles, TV and radio spots, and news announcements can make your company stand out above the crowd — and above your competition.

The benefit of doing PR at an inbound marketing agency is we commit to measurable goals. While most agencies measure output of PR efforts, we focus on the outcome and impact on our clients' business goals.

TELL A GOOD STORY AND PEOPLE WILL REACT

Achieve Clean is an all-natural laundry detergent created to support and employ Minnesota adults with disabilities. When the organization discovered their government funding would be significantly cut by 2020, they decided to use the detergent as a revenue source to keep them up and running. Great narrative, right?

We executed a two-week campaign to pull the heartstrings of Minnesotans and share the impactful story behind Achieve Clean and its employees. Since we know you love data, here are some points that will WOW you.

Isn't that something? Tangible proof on the power of public relations in inbound marketing. Interested in how we made it happen? See the full story here.

Thanks to public relations efforts, within 48 hours a startup company’s website sessions jumped 929 percent ... Yes … you read that right … 929 percent in two days.

The biggest measurable ROI comes with a dollar amount. The startup is able to attribute a handful of new customers directly to PR efforts.The numbers above were thanks to one KARE 11 TV news story, a Minneapolis media outlet. In the following weeks, the story was picked up by WJON Radio, made the cover of St. Cloud Times, was featured on KNSI radio during a live broadcast, and a spread in Twin Cities Business Magazine.

During the six month campaign, the strength of Badge Messenger's website increased dramatically due to the high authority backlinks gained through our efforts.

The Ahrefs Rank takes into account every website there is. The closer the number gets to zero, the stronger the website is. During the campaign, the company's rank increased by more than 20 million, which means its website is ranked higher than 20 million other sites and will continue to climb as we continue our efforts and content creation.

You know you have a good PR/ Marketing team when the media reaches out directly to your client for help on a story. That happened in September when KNSI reached out to the Badge team for this story. That relationship between the news outlet and Badge Messenger is the ultimate goal of public relations. The bond cannot be measured by leads or conversions, but it's extremely valuable and would have never happened had Badge Messenger not engaged in public relations efforts with Leighton Interactive (shameless plug).

A COVER STORY BUBBLES BERNICK'S TO THE TOP

In 1916, a husband wife duo began hand-bottling carbonated beverages and delivering them by horse and wagon (or sleigh, in season). When prohibition hit, they distributed non-alcoholic beer. When the amendment was repealed, Bernick's became one of the first distributors of legal beer in Minnesota. Today, the fifth-generation family-owned company has grown into a leading wholesale soft drink and beer distributor serving Minnesota and Wisconsin. Cool story, huh?

Bernick's is a storyteller's dream client. They've been around 100+ years, is family-owned, is an active member of the community, treats their employees well, has a spotless reputation, and the list goes on.  The folks leading the Bernick's operation can spot trends from miles away, and always make sure the newest flavor of seltzer or craft beer is available to their variety of customers across all markets.

Part of the work we do with Bernick's is to bring awareness to its services, one being vending. In 2019, we pitched Bernick's story to Vending Times, a trade publication with more than 12,600 print and 15,000 opt-in email subscribers. (In my opinion, those are pretty good numbers for a niche industry publication.) That email pitch resulted in two placements; the Bernick's family on the front page of the May 2019 print magazine and a high-authority backlink showcasing the company's longevity and thought leadership in the industry. Read the full story here.

This earned media spot didn't come with a dollar amount, meaning we didn't have to pay the publication to run the story. We spent hours researching industry publications, looked at the stories these outlets were covering, and downloaded media kits to discover their audience to make sure it matched Bernick's persona. We did our homework, and the reporter could tell. When we reached out via email to see if Vending Times would be interested in telling Bernick's story, and they said yes.

This is textbook media relations. We gave Vending Times a story they didn't have to go out and search for. If you help a journalist, they'll help you.

Every year representatives from Virnig Manufacturing travel to the ARA show in California to showcase its innovations in skid steer attachment design, engineering, and manufacturing. This year was different as there was a buzz about Virnig like never before. High-profile original equipment manufacturers (OEMs), dealers, consumers, industry pros were visiting the booth referencing the company's feature article in The Land. The Land is a weekly print publication, serving approximately 13,000 subscribers interested agriculture-rural life across Minnesota and northern Iowa.

The local distribution may be in the thousands, but a URL can be shared with anyone. People outside the midwest consumed the article via social media.

Prior to the show, we did a paid social and paid search push encouraging attendees to stop by the booth. Accompany those efforts with a new blog and earned media to create the picturesque PESO structure. In a meeting after the event, Virnig said it was the company's most successful trade show yet.

There's a large part of PR we can't measure. When the magazine showed up at the Virnig office doorstep, the humble team was in awe. After 30 years in business, seeing the company name in print did more than build brand awareness, it increased morale for every employee, built up the Virnig team as thought leaders in the skid steer attachment industry, and provided them with third-party validation so many companies lack.

When you are competing with huge companies like Case and John Deere, strategies like the one we employed for Virnig made a memorable impact — which is extremely difficult to do.

THERE'S MORE WHERE THAT CAME FROM

Do you see the trend? Every single example mentioned above moved the needle for our clients. We were able to use data from HubSpot, Google Analytics, and social media to help measure the impact of public relations in correlation to our clients' business and marketing goals.

We are well aware your marketing budget is slim. Public relations isn't something you should just arbitrarily consider; it's essential. To bring this post full-circle, like any good storyteller does — I'll leave you with another cheesy quote. 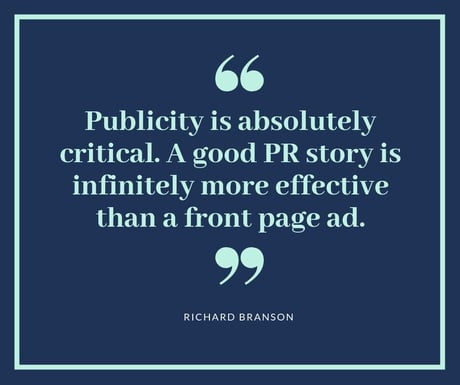 Storytelling is at the core of everything I do. As a former journalist, I know from experience that people want to hear stories about people, not businesses or products. I have a knack for breaking down complex topics into simple, easy to digest, and actionable content. Stories sell. My passion to find and share those stories using inbound marketing tactics works in our client's favor. My story? I'm a mom, a marketer, and Moscow Mule drinker.