This is a guest post by Mike Davies from ITPR.

Given that 99% of a PRs job is to understand the media and build relationships with journalists, it might sound a bit strange that the practice of “selling in” a story to a journalist can be so nerve wracking.

But this process of pitching stories is often the most daunting task for any new PR exec; and still conjures a few moments of hesitation for the odd seasoned professional.

Anyone who has ever caught a journalist on a bad day will understand why pitching stories can be so nerve wracking. Short replies and quick hang-ups can leave even the most thick-skinned with a feeling of trepidation.

As an ex-journalist, I must confess to understanding some of the frustration felt by my former colleagues.

Like any first in your life, I will never forget the first PR pitch I received as a young journalist that made me question what exactly these public relations people were being paid for.

Not only did the “pitch” start with a generic “hi there”, the story was completely irrelevant to the area I was writing about and had no value to my readers.

Worse still, when the follow-up call came in a few days later, not only did the PR person on the other end not understand why the story wasn’t relevant, they spent the next five minutes trying to explain why I didn’t understand the importance of the story.

In case you’re wondering, the “story” was a promotional article about an event not even happening on my news patch and, needless to say, never made it out of my inbox.

It’s been a few years now since I made the move to the “dark-side” of PR but my early journalism experience of this side of the fence has revealed a sad truth.

And that is that some PR people are just downright terrible at pitching stories and are driving stressed, time-poor journalists mad with inane and disruptive pitches that have no chance of success.

While some of the examples may be extreme, just type “Dear PR people” into Twitter for a flavour of some of the worst practices being deployed by PR agencies.

To give you an idea: 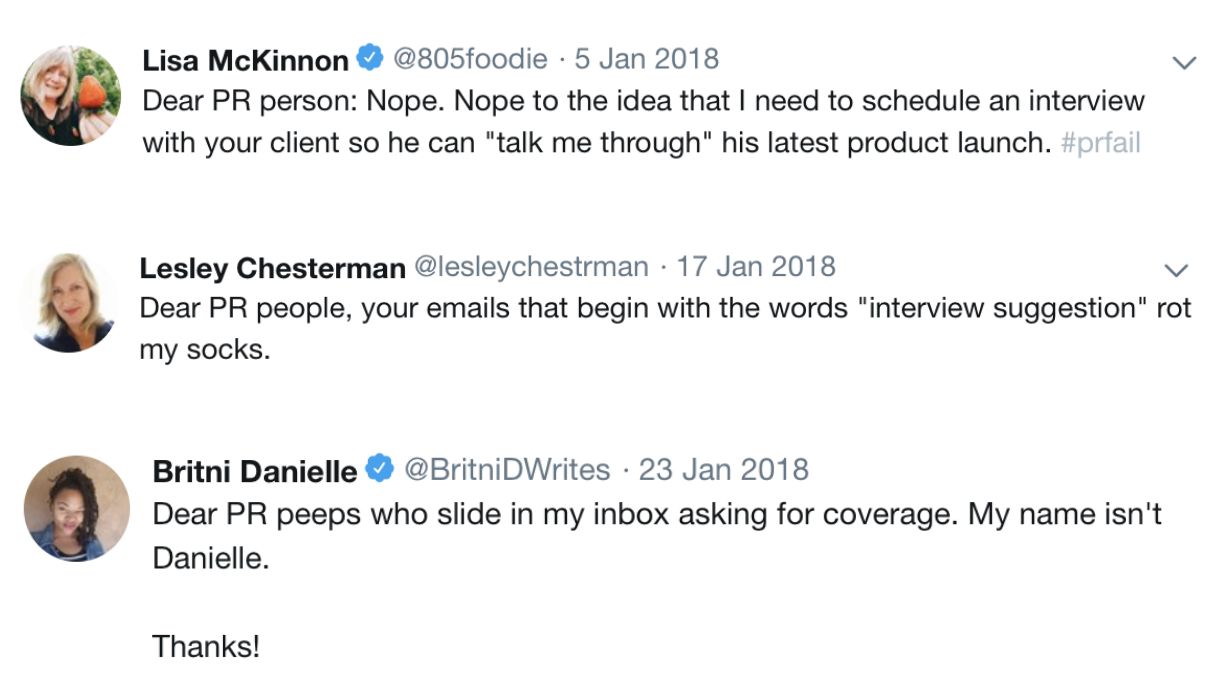 Again, these may be extreme, and it’s not like journalists are completely blameless in this issue, but it doesn’t help when lazy PR people put the rest of us in a bad light.

With a bit of common sense and some Inbound PR methodology, pitching to journalists can be fruitful for you and your clients and, if done properly, can make them come to you rather than chasing them all the time.

As I said in my own experience on the other side of the PR pitching fence, if you can’t understand why a journalist isn’t thrilled to get your email or call, just think back to the last time you got an unwanted sales call.

Chances are it left you feeling like your time had been wasted.

It’s the same thing when pitching to journalists.

Journalist numbers are declining and reporters today are as time poor and pressured to produce stories as they have ever been.

Wasting 15 minutes on the phone listening to you drone on about a story idea they have no interest in isn’t going to endear you or your client to them.

In fact, it will likely end up with you automatically going into their junk file the next time you send a story to them.

You wouldn’t waste your company’s time trying to sell a product to a customer who is never going to buy it; so why waste time and effort targeting journalists who don’t write about the sector you’re in?

It doesn’t take any effort to research which journalists cover the industry or sector you’re in and, by putting your story in front of the right journalist, you greatly increase your chances of getting coverage.

Before you start to pitch your story, you should look to create media profiles of the journalists you want to target and use this to find them and the relevant publications.

Your client has just moved into an office down the road which is the same size as the one they’re in now. They’ve just finished in the Top 10 of an obscure competition. Or they’ve just undergone a re-brand.

Let’s be honest, these might be significant internal milestones for your client. But outside their own four walls, no-one is really going to care and journalists in particular have no interest.

As a PR professional, your clients are paying for your expertise to filter out the non-stories and find or generate stories that will actually generate headlines, rather than burn bridges with journalists.

The first thing to consider when trying to work out if something is a story is does it at least contain the essential, relevant information, like the 5 Ws (Who, What, When, Where, Why) – if any of this is missing, you don’t have a story.

Once you’ve established this, you next need to consider:

Once you’ve got your story down, doing your research into journalists who write about the same topics will help focus your pitching efforts.

For instance, if a journalist has recently written something about the topic you’re now pitching they’re not likely to write about the same thing for a while – unless you offer them a new angle.

Taking the time to get your story solid and then tailoring your pitch will put you in a much better position than taking half a story and expecting the journalist to fill in the gaps.

#3 Give journalists what they need

If you’re reading this then I’m going to assume you at least have a passing interest in PR or the media and that you’ve read a couple of news articles in your time.

What you’ve probably noticed is that news articles are like a content package; with headlines, main body text and images, or extra information in the form of side bars or break outs.

These extra bits of content don’t materialise out of no-where and need to be sourced.

If a journalist has the choice between printing a story which includes everything they need in one place, or one which involves them putting in extra work – which do you think they’ll choose?

Before you send anything to any journalist, make sure you are including everything they need to be able to get your story live without having to come back to you for any clarification or follow ups.

Using a bit of Inbound PR methodology, you could even go a step further and put everything a journalist would need to make their own story on your company website in the form of an Inbound Newsroom.

And that, as they say, is that.

Pitching to journalists has forever gone “inbound” and those agencies or businesses relying on the outdated outbound, hounding and interruptive methods of trying to secure coverage are asking for a one-way trip to a journalist’s junk file.

How do you pitch the media?