Masters of Storytelling: The Brands that Excel at it

Every brand has a story to tell,

but not every brand has mastered the art of telling its story in a way that is meaningful, attention-grabbing and long-lasting.

Just as people, some brands have a "way with words" – they are natural storytellers – while others find it a little bit more challenging and need to acquire the relevant skills first. Learning from the best in class is one step ahead at becoming a masterful storyteller.

But who are those brands that we can learn from? Who are the masters of storytelling? What do they stand for and what is their purpose?

That's what a recent study by Aesop tried to find out. It surveyed 2,000 consumers in the UK, asking them to rate companies against nine key storytelling elements:

The combined ranking result is enlightening: 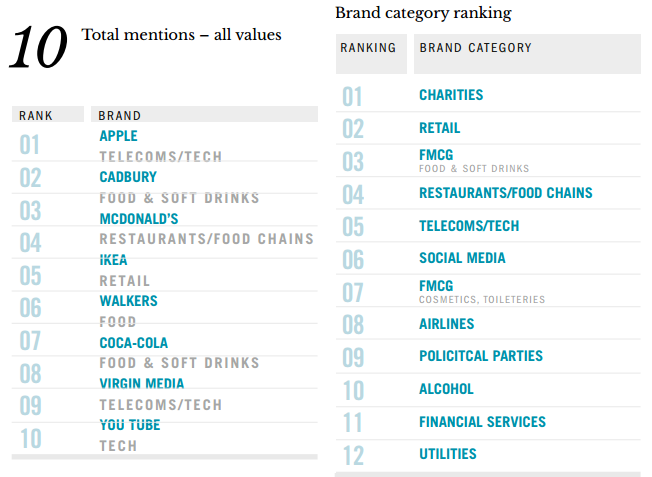 I don't think it's much of a surprise that Apple and Cadbury are ranked as the two most compelling storytellers.

Apple, for one, has always put its brand story and philosophy at the very core of everything they do. It is this consistency that delivers a believable, enticing and shareable experience. Just think about the "Think Different" campaign and the “To the crazy ones” commercial. If this is not unique or powerful, I don't know what is...

Remember this amazing viral video by Cadbury aimed to thank their Facebook followers?

Imagine how much effort and how much time it must have taken to create this giant "chocolate thumbs up" piece by piece, from thousands of Cadbury Dairy Milk.

But what's the story? It's the entire 'always on' approach Cadbury took by live-streaming the event for two-days to their Facebook fans so that they can watch the giant chocolate thumbs-up being constructed. This, in turn, helped build momentum and anticipation as it involved Cadbury's fans in a genuine, relationship-strong and interactive way, making this is a story about co-creation and personal impact.

What else is there to consider from the survey findings?

According to the report, charities and social media as brand industries are new additions this year and it's great to see that charities are top performers (Red Cross as example). I think there's a simple explanation to this: unlike giant corporates, charities have one thing in common – everything they do, they do it to help. That in itself is a powerful story.

Retail and FMCG companies seem to have a very clear brand personality too.

Below I've listed the very top among all identified storytelling brands in the UK per category and have additionally linked most of them to a powerful campaign so that you have a specific example you can relate to and gather ideas or generate learnings from.

Storytelling masters in retail are IKEA, John Lewis and Marks&Spencer and among restaurants and food chains are McDonald's and Starbucks (also, check out Stabucks' Instagram account).

Winners for FMCG Cosmetics&Toileteries are Dove and Fairy and for FMCG Food&Drink are Cadbury and Coca-Cola (see example at the end).

When it comes to alcohol, Guinness and Jack Daniel's are considered best at storytelling.

Apple, Virgin Media and Samsung top the list for telecommunications/tech.

Virgin Atlantic and BA tell most compelling stories for airlines, and for utilities it is British Gas and E.ON.

And to finish with a nice inspirational story, here's some great work from Coca Cola – "The Happiness Machine" that has been spreading positive feelings and experiences all over the world both online and offline. What's the story here? Again, this is another example of how, in order to be truly powerful, storytelling must be aligned with the very core of what an organisation does, it needs to be a values-based holistic campaign. Here it is about delivering "doses of happiness" – exactly what a can of Coca Cola is supposed to do.

What's your verdict: Which brands are best at storytelling?