The Eight Principles of Inspiring Storytelling

When was the last time you 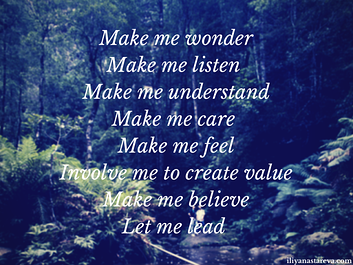 saw a presentation, visited a seminar or watched a speech that kept your full attention throughout the entire time? That's a hard one, isn't it? The last time I had such an experience was a few days ago when I watched Emma Watson's speech, introducing her HeForShe campaign at the U.N. Headquarters last week. Her words not only kept me 'glued' to the screen, but also made me realise that all inspiring storytelling is based on eight common principles.

It doesn't matter if we are talking about a speech, a video, an email or a social media post – all these communication avenues have the same purpose: to send a message. But to create and deliver that message in a way that really makes an impact and leaves a mark – now that's an art, and a science.

Apart from holding a game-changing speech on feminism, Emma Watson also taught us some important lessons to help us master that art and science.

Written below are the eight principles that, in my opinion, are the cornerstones of inspiring storytelling. You don't have to integrate all of them in a single piece, but they are a guidance of what your story should strive for.

You can use them not only when you're developing a presentation or writing a speech, but for any of your content, or even for any personal interaction. Because at the end of day we communicate with people and tell stories all the time. We share our ideas, thoughts and beliefs with others in every single interaction – be it online, offline or on the phone. Humanising that experience is what connects and inspires.

"I decided that I was a feminist. This seemed uncomplicated to me. But my recent research has shown me that feminism has become an unpopular word. Women are choosing not to identify as feminists. Apparently, [women’s expression is] seen as too strong, too aggressive, isolating, and anti-men, unattractive even."

"The more I spoke about feminism, the more I realized that fighting for women’s rights has too often become synonymous with man-hating. If there is one thing I know for certain is that this has to stop. For the record, feminism by definition is the belief that men and women should have equal rights and opportunities. It is the theory of political, economic and social equality of the sexes."

"What struck me the most was that less than 30% of the audience were male. How can we effect change in the world when only half of it is invited or being welcomed to participate in the conversation?"

"Men, I would like to give this opportunity to extend your formal invitation. Gender equality is your issue, too. Because to date, I’ve seen my father’s role as a parent being valued less by society. I’ve seen young men suffering from mental illness, unable to ask for help for fear it would make them less of a man. In fact, in the UK, suicide is the biggest killer of men between 20 to 49, eclipsing road accidents, cancer and heart disease. I’ve seen men fragile and insecure by what constitutes male success. Men don’t have the benefits of equality, either."

Do you have more guiding principles for inspiring storytelling?